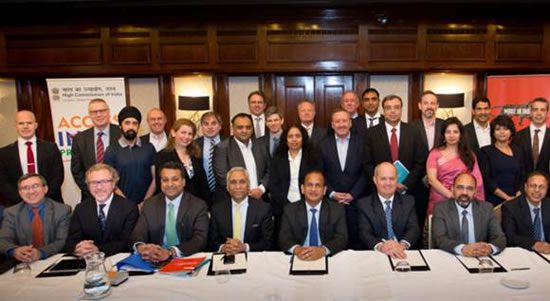 RJM is one of only 24 UK businesses, out of over 400 applicants, to have been accepted onto this new programme, which will provide a range of mentoring, networking and market entry support services.

The first cohort of 24 British SMEs to be taken on board AIP was announced during the recent visit to the UK by India’s Prime Minister Modi and Ramesh Abhishek, India’s Secretary – Department of Industrial Promotion and Policy.

Following the launch of the Access India Programme, a series of outreach events, activities and interactions are now taking place across the UK to increase awareness
of the AIP and to give the organisers a unique insight into the mindsets of participants’ businesses and their export / international investment plans.

“RJM is already active in the Indian market, through its Chennai-based representative, Buka Power, and the opportunities for RJM to work in partnership with Indian boilermakers and utility supply companies are now considerable”.

“As a participant in the first AIP cohort, we welcome the additional support that we will be receiving from the Indian government and look forward to growing our business in the region at an accelerated rate,” he added.

AIP – Launch of First Cohort and Programme Update
The High Commission of India in London’s flagship programme – the Access India Programme (AIP) has reached an exciting landmark. The First Cohort of 24 UK SMEs to be taken on board AIP was announced during the recent visit of PM Modi and his senior delegation to the UK.

A meeting of these companies with Mr Ramesh Abhishek, Secretary DIPP and Invest India CEO, Mr Deepak Bagla was organised on 19 April 2018. Some of the larger UK companies including Perkins, BAE Systems, JCB, Rolls Royce, Renishaw and TWI, who are involved as mentors for AIP, were also present at the meeting.

1. June 2017. RJM International signed a Representative Agreement with a local Indian company, Buka Power, based in the city of Chennai in Southern India.
With a total population in excess of one billion people and a confirmed government ambition to deliver reliable and affordable 24/7 power across India, the opportunities for emissions and efficiency experts such as RJM International to work in partnership with Indian boilermakers and utility supply companies are now considerable.

Commenting on the representative agreement, John Goldring, Managing Director of RJM said, “India is committed to a major expansion of its power generation capacity and whilst renewables are increasingly important, the bulk of the additional gigawatts will be delivered by thermal plant.

“Within that growing thermal-fired segment of the market, Indian coal will be the primary fuel source and this is where RJM’s ground-breaking technologies can play an important role, helping to keep emissions as low as possible without compromising on operating efficiencies or cost.

“In addition, our expertise in co-firing with biomass is also something that has attracted the attention of the Indian market.

“We are delighted to have signed with Buka Power and look forward to a mutually beneficial relationship developing,” he confirmed.

2. May 2017. RJM recently presented its portfolio of cost-effective emissions reduction and efficiency improvement technologies to the Indian market at Power-Gen India and Central Asia 2017, New Delhi.

3. April 2017. RJM was awarded the Queen’s Award for Enterprise: Innovation 2107 for its ultra-low NOx technologies that are enabling operators of power stations, industrial plants and other combustion facilities the world over, to meet the latest emissions regulations.