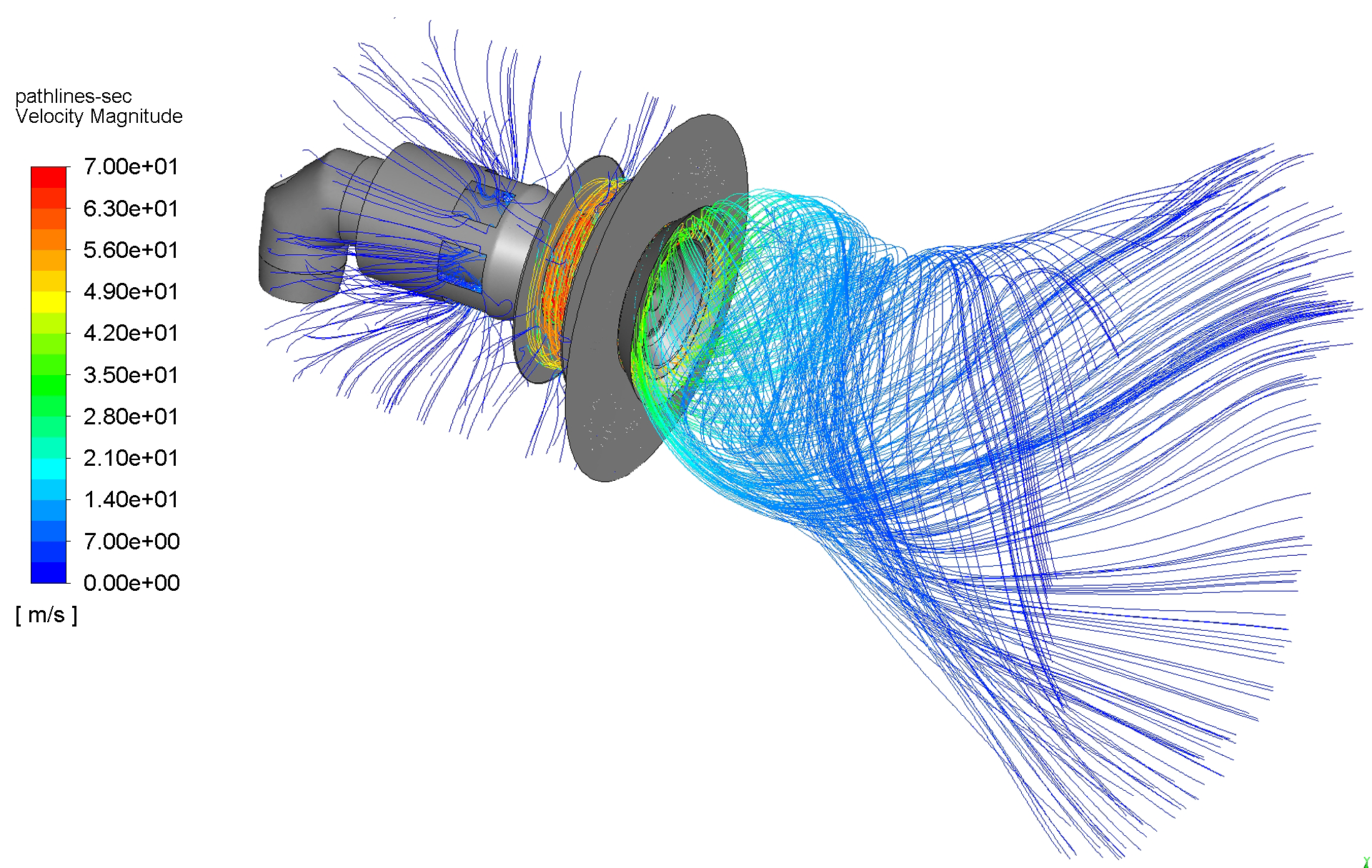 RJM’s modelling capabilities across every boiler design and every fuel type enable it resolve the most complex combustion, emissions and other operational challenges. 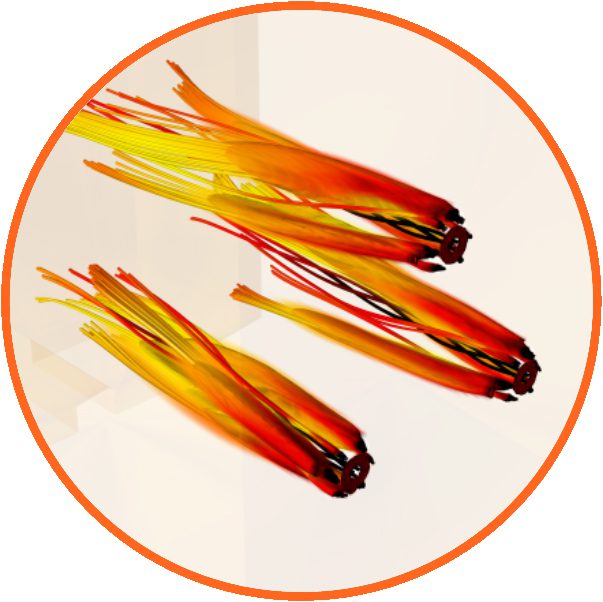 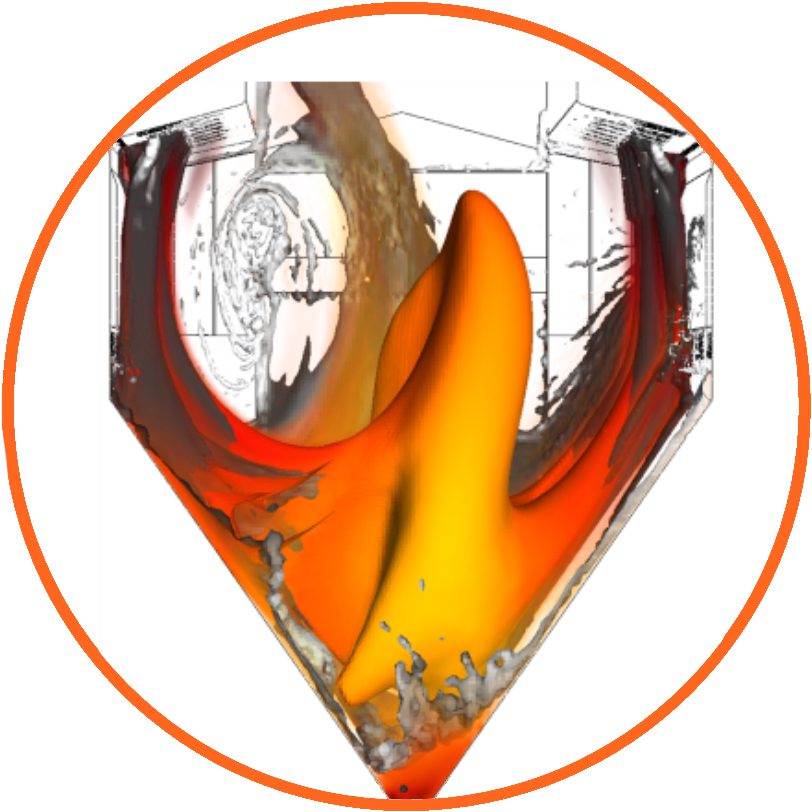 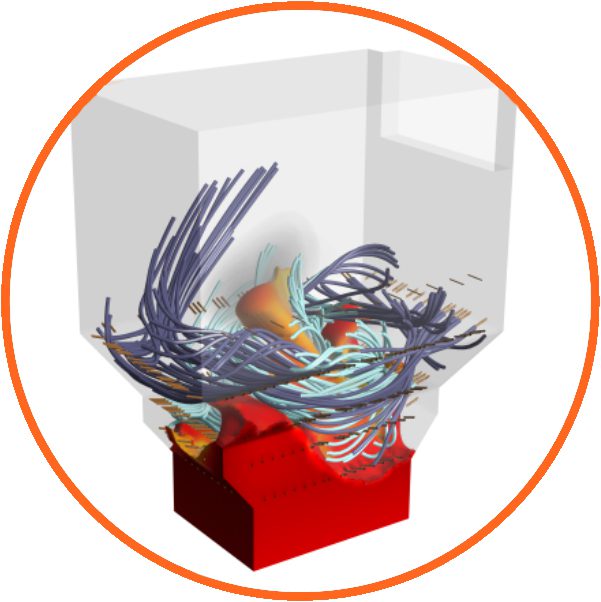 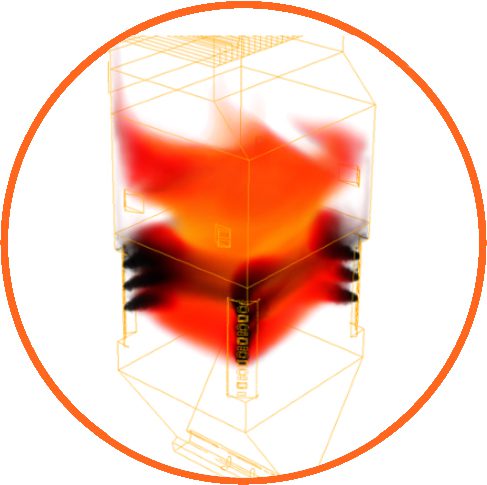 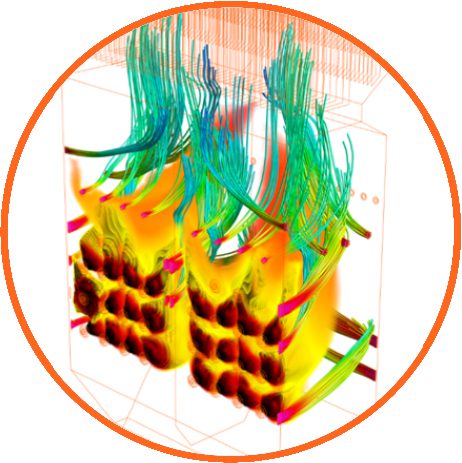 Computational Fluid Dynamics (CFD) modelling has been a core component of RJM’s commercial offer since the 1990s, when it pioneered the use of combustion CFD modelling to determine how modifications to an OEM burner design could deliver significant emissions reductions at relatively low-cost.

Today, RJM continues to push at the boundaries of combustion CFD modelling to resolve the most complex combustion challenges, including helping its customers explore the use of new, lower-carbon fuels. Through continued investment in CFD programming and its in-house team of CFD engineers, RJM is able to achieve exceptionally low NOx emissions, at levels that were previously thought impossible through primary measures alone.

RJM’s CFD modelling framework, begins with developing a deep understanding of current plant conditions. Once reliable input data has been collected and characterisation of fuel behaviour completed, RJM can then produce a robust Baseline Model of the existing performance, no matter whether the fuel is coal, gas, oil, biomass or a waste stream.Following successful Validation of the Baseline Model, using data and observations gathered at the plant, RJM can move ahead with Upgrade Modelling. This is where changes are made to the system design and process conditions, allowing RJM to trial potential upgrades and predict their impact on combustion and emissions performance.

The final Upgrade Model provides the details of the solution required to meet the customer’s performance objectives and gives a reliable prediction of the performance to be expected. This in turn enables the customer to make an informed investment decision about proceeding with the proposed upgrade.

With over 40 years’ CFD experience, RJM is so confident in the results of its modelling that it uses CFD to guarantee the performance of its proposed solutions.

As fuel is the single largest operating cost for any power station, there is always pressure to find cheaper fuels. However, the cheapest fuel is not always the most sensible option. The “best” fuel is the lowest cost fuel that provides consistent, reliable, safe, and low-risk generation throughout the load range. Predicting the performance of a fuel can be difficult and predicting the performance of a blended fuel is even more complex. That is why RJM has developed proprietary methods for assessing and recommending fuel blending strategies for customers, to enable them to significantly improve plant reliability, performance and overall profitability. RJM employs industry-leading fuel experts to provide valuable insights into the performance of different fuels and fuel blends. They have access to RJM’s extensive database of international fuels and use bespoke analytical tools to predict various performance parameters.

This includes an add-on cost model and shows the true value of a fuel, relative to a ‘reference’ fuel. RJM’s fuel assessment service can be coupled with a combustion optimisation programme to deliver maximum plant benefits.

Combining its knowledge of combustion and fuels, RJM can offer a wide range of bespoke and customisable fuel assessment services to help customers optimise their fuel diet and fuel management strategies, taking into account plant design, performance and operational limitations.

Where plants are considering a fuel switch, such as a coal plant co-firing with biomass or a biomass plant introducing a new waste stream fuel, RJM can offer a full plant conversion service, including risk assessment. 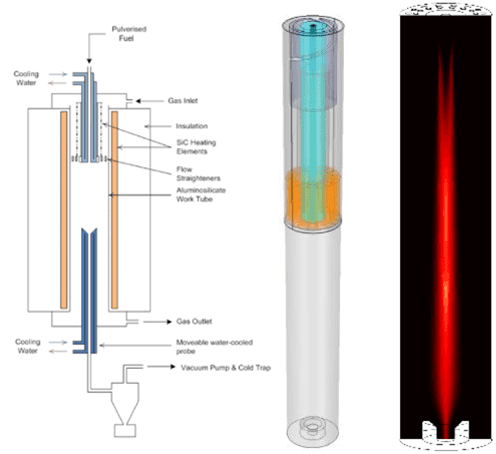 RJM’s industry-leading fuel experts provide customers with valuable insights into the performance of different fuels and fuel blends, using a combination of bespoke analytical tools and its own extensive database of international fuels.

RJM’s Fuel Assessment services include an add-on cost model – this shows the true value of a fuel relative to a ‘reference’ fuel. RJM’s fuel assessment service can be coupled with a combustion optimisation programme to deliver maximum plant benefits. 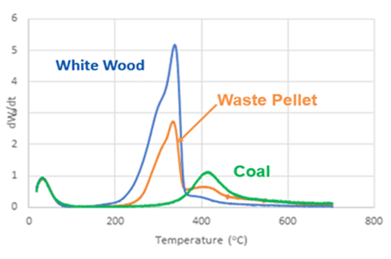 Thermogravimetric analysis of a fuel gives valuable information on the temperature interval and rate volatile species evaporates from the fuel particles. This can have safety implications as well as affecting combustion. 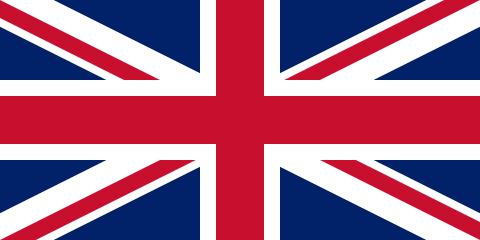 T-fired units present a particularly difficult technical challenge because as many as 60 different nozzles deliver air and fuel to the boiler, each one controlled by an individual damper. RJM has invested in a new supercomputer to create the complex combustion CFD models that can capture the incredible complexity of these units. On T-fired units, pressure is often only measured upstream of the dampers. However, knowledge of the losses, due to the nozzle geometry and the position of the damper, is required to accurately characterise individual flows. Isothermal models provide input data on pressures for use in RJM’s own custom software for analysis of stoichiometry and momentum, from which upgrade CFD cases can be proposed. 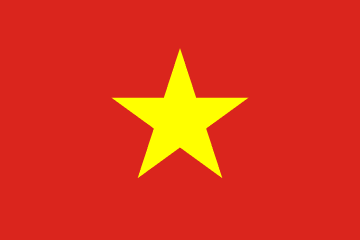 Exploiting advanced CFD modelling to resolve a range of issues

AES-VCM Mong Duong II is a 2 x 620MW power plant which came online in 2015. Firing a locally-sourced anthracite coal, the sub-critical downshot / arch fired boilers were experiencing a number of severe performance issues including slagging, unstable combustion, and frequent boiler trips, despite being a new plant. Whilst the OEM had carried out their own CFD analysis, it had not been able to determine why the plant was not working correctly. Having impressed AES with its work resolving complex combustion issues at another nearly new plant, AES Maritza in Bulgaria, the plant owners of Mong Duong II called in RJM to support the in-house team. 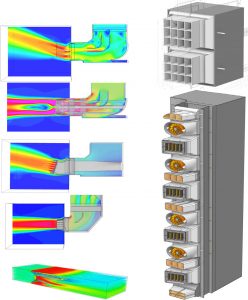 For Kilroot, sophisticated CFD modelling of every nozzle and damper has enabled RJM to “fill in the gaps” of the on-site instrumentation

Combustion CFD models are essentials for capturing thee incredible complexity of T-fired boilers, where individual jets of air can have a significant impact on local NOx production and impingement on wall tubes. These models are essential for fully capturing the impact of the proposed upgrades, and with RJM’s new High-Performance Cluster (HPC) supercomputer, these six million cell models, can be run in 12-18 hours rather than days, allowing for rapid development of solutions. At Kilroot, this has been used to develop an upgrade solution to utilise RJM’s patented Separated Under-Fire Air (SUFA) system to deliver air through the centre of the fireball and reduce thee amount of air injected through conventional means. This work strives to reduce NOX through primary measures only, whilst also reducing unburnt Carbon in Ash. 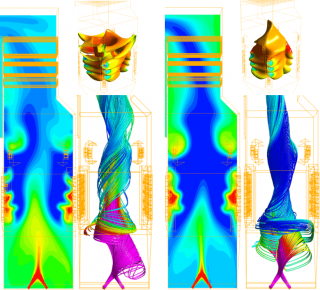 The resulting improvements have completely met our expectations.”

Find out how RJM resolved these issues…

RJM was tasked with carrying out a series of engineering work packages to:

Firstly, RJM performed a unique suite of integrated work packages, designed to fully characterise the system and the fuel. They included:

Each of these work packages produced critical input data for the CFD model, enabling RJM to produce a half-furnace combustion CFD model that would provide reliable and accurate results and predictions. The CFD model results were then validated through a series of comprehensive site tests, analysis and observations, before RJM utilised the model to custom-design a set of cost-effective modifications to the existing combustion system. These modifications included:

Benefits to the plant

The results included substantially improved combustion performance and flame stability. This in turn enabled AES-VCM to remove a large portion of the furnace refractory to reduce slag-build up and mitigate large slag falls, which resulted in a significant improvement in unit reliability, to a point today where combustion related unit trips are almost unknown.

Working directly with site engineers, new optimum mill firing configurations were also devised and implemented and these have resulted in a significant improvement in combustion efficiency, with a large reduction in carbon in fly ash.

Improving performance and reliability at AES-VCM Mong Duong II has been one of the most complex assignments ever tackled by RJM.

Looking to the future

RJM is still working closely with the in-house team at the power station and continuing to deliver a programme of incremental improvements across the plant. Much of this has been achieved through remote monitoring of the plant’s DCS by RJM’s engineers in the UK.

“RJM has been a trusted partner in our efforts to improve combustion and unit reliability at our 1,200MW Mong Duong II facility in Vietnam. RJM’s engineering strengths, combustion modelling and experience has helped guide us in quickly making the proper decisions on needed modifications. The resulting improvements have completely met our expectations.”
Kevin Pierce, Plant Manager, AES-VCM Mong Duong II, Vietnam RJM has invested in a new supercomputer to create
the complex combustion CFD models that can
capture the incredible complexity of these units.

Key challenges
To support the world-first conversion of a front wall-fired PF coal plant to fire a waste-derived energy pellet consisting of 50% biogenic material and 50% plastic not suitable for recycling.

Key challenges
This 28MWe fluidised bed gasification plant, firing multiple solid fuels was experiencing various operational problems. Also, due to over-reliance on its secondary support fuel, it did not meet the criteria to qualify for the Contracts for Difference low carbon subsidy scheme, which seriously impacted on the financial viability of the plant.

Key challenges
As part of Kosovo’s accession planning to join the European Union, its 680MWe lignite-fired power station, Kosovo B needs to be brought up the latest EU standards.

Project to reduce NOx and return plant to full output

Key challenges
The main challenge for RJM was to reduce the amount of flame impingement on the boiler tubes, as this was preventing the plant from operating at full power. In addition, it had to be achieved in a way that ensured NOx emissions remained below the 250mg/Nm3 threshold.