RJM International has appointed nine new joiners at different experience levels, to support the growth of the business and the successful completion of a number of emissions upgrade and combustion improvement projects.

Alf Malmgren joins as Senior Combustion and Fuels Engineer. He was previously with RWE followed by a period of consulting and has particular expertise in biofuels combustion and modelling. 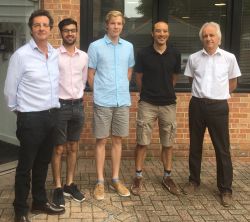 Dr. Anura Perera joins as Principal CFD Engineer. Previously he was Principal Engineer, Combustion at Doosan Babcock. He has held a number of senior positions in the sector, including developing emissions modelling software for ANSYS Fluent and in higher education, as a Visiting Lecturer in CFD and as a Senior Research Fellow in Computational Combustion.

David Fong joins as Senior Process Engineer. He was previously a consultant and has specialist expertise in fuel milling and the combustion of biomass fuels and related issues.

Alan Tucker takes up a full-time role as Draughtsman and Design Engineer, having worked as a contractor at RJM for four years. He was previously with Onet Technologies and has particular expertise in 2D / 3D modelling.

Christopher Biggs joins as Head of Global Marketing. He previously worked as a corporate communications consultant to RJM and has solid experience in building brands internationally.

Similarly, Rachel Avelena, another of RJM’s YII students (2015/2016) and an Indonesian national, will also be returning to RJM as a Project Engineer. A Chemical Engineering graduate from Nottingham, her language skills in Indonesian and Mandarin will provide additional support to RJM’s new projects in Asia-Pacific.

Commenting on these appointments, John Goldring, Managing Director of RJM said, “RJM has recently secured a number of new projects and in order to maintain the highest levels of project delivery and customer service, we need to make sure we have the right people with the right skills in the right regions,” he said.
“This set of new appointments is a key component in our international growth strategy and a real achievement for the company, confirming that what we do and how we do it is highly valued by our customers all over the world,” he added.