RJM International, the Winchester–based provider of emissions reduction solutions and equipment to the power generation and large combustion plant sectors, announces today, Tuesday 1st November 2016, that it has now completed an Ultra-Low NOx project at AES Ballylumford B to enable the generator to deliver additional capacity into the grid.

In November 2014, following a competitive tender process, AES was awarded a contract by SONI, the System Operator for Northern Ireland, to deliver additional capacity into the grid from January 2016, for an initial period of three years, extendable by a further two years, at the discretion of SONI.

The plant AES had earmarked to deliver this additional capacity, were two 180MW gas-fired units. Re-categorised as “new plant” under the 2016 Industrial Emissions Directive (IED), these units needed to be re-engineered to meet the latest IED emissions limits, with a particular focus required to reduce considerably emissions of NOx and particulate matter.

Having previously completed other successful Ultra-Low NOx and efficiency improvement projects for AES, RJM was employed by the generator to ensure both units would meet the IED emission limits and enable them to start generating in January 2016.

RJM followed its tried and tested procedure, beginning with a detailed site survey and CFD analysis to fully understand how the plant was operating and to identify where combustion engineering-based modifications could be introduced to return the plant to full IED compliance. 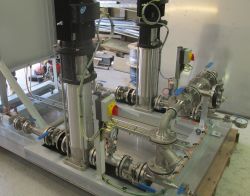 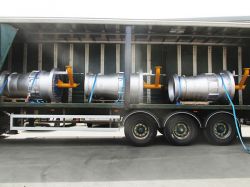 Three of the new RJM CleanAir Burners™ being delivered to site

With the plant upgrades successfully completed, the extension of the B Station has ensured vital security of electricity supply to consumers and businesses in Northern Ireland over a three year period for less than 1% of the average electricity bill. In addition, the upgrade has retained upwards of 140 local jobs, both at AES and long-term contractors.

Commenting on the project, Peter Nesbitt, AES’ Station Upgrade Project Co-Ordinator said, “The performance improvement in terms of reduced emissions that RJM has delivered on both units enables AES to continue to support the most sustainable and affordable security of supply for Northern Ireland. In terms of cost per tonne of NOx reduction, the RJM solution was by far the lowest cost option we could have chosen to meet IED compliance and both upgrades were carried out on time and within budget. This project’s overall success greatly benefitted from the close working relationship between RJM and the AES project team.”